August 28, 2019 0 By pavani
Longtime readers of my reviews and my own short stories will probably know that I have a passion for two particular literary motifs: slow-burning, high-concept, low-gore, mystical terror and a deceptively disarming Midwestern setting. In Ty Tracey’s powerful freshman novel, both are brilliantly combined into a chilling narrative about a hardscrabble paranormal investigator’s fateful arrival at an ill-starred ghost town hidden in the sleepy hill country of Ohio. I certainly have my biases, and while I have reviewed many books for Oldstyle Tales which absolutely fascinate and thrill me, this is by far my favorite.
Like the classic demonic stories of M. R. James (“Canon Alberic’s Scrapbook”), Algernon Blackwood (“Secret Worship”), William Hope Hodgson (“Carnacki the Ghost-finder”), and H. P. Lovecraft (“The Festival”), the story involves a curious individualist being lured to a liminal zone – a secluded meeting place of the natural and supernatural – where he finds himself overwhelmed by the surprising power of the dark arts. Unlike so many horror novels which I have read – so, so many – this one studiously nurses an atmosphere of psychological terror (rather than cheap body-horror), providing its readers with a simmering stew of intrigue that slowly, imperceptibly rises to a thundering boil. 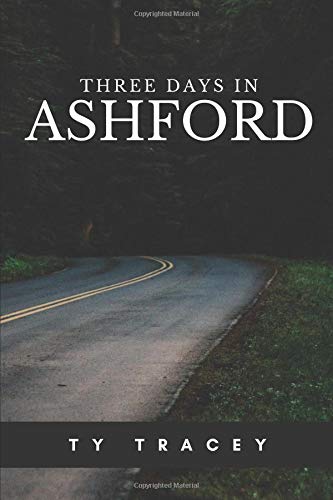 Before I proceed too much further, let me delve a little deeper into the plot. Daniel, the protagonist, is a tenacious ghost hunter with a rough childhood – having survived foster care and a delinquent adolescence – who has gained national fame through his widely publicized cases and a popular television show. His career is driven by genuine curiosity rather than greed, which is how he came to investigate a Podunk town like Ashford, Ohio.
One night while drinking at a hotel bar he meets a stranger who is still haunted by their experiences in this abandoned village, telling him shocking stories about the bizarre events that took place there over several decades – culminating in the town’s dereliction. Fascinated, he and his crew travel to the Buckeye hinterland where a spooky adventure rapidly devolves into a traumatic encounter with personified evil. Cut off from civilization by gloomy forests, the team find themselves sucking into a portal of madness and metaphysical terror. As to the rest, I’ll let Tracey speak for himself:
“As Daniel slides deeper down the rabbit-hole and watches helplessly as his mind and sanity are slowly ripped away, he and his crew must embark on a journey across Ashford, across timelines and within the deep recesses of their own souls to uncover answers they otherwise would have never cared to know. Answers that will only serve to question the very psychological, physical, theological and philosophical meaning of our existence as a species.
"However difficult to stomach, the only way to save themselves from the unimaginably savage force that threatens, not only their lives, but the very existence of humanity, is to decipher the riddle that haunts Ashford. The town that Satan calls home.”
Once again, I doubt that any longtime reader could fail to see how such a story would engage me, and I assure you that – as other reviewers have noted – the book hooks you with its very first page. Whether intentionally or not, it shares much of its DNA with the works of James, Blackwood, Hodgson, and Lovecraft, in that it crafts a universe of demons which overshadow humanity and offers up a brand of horror that is more cosmic than Gothic. There are also undeniable touches of Arthur Machen, Stephen King, and Ambrose Bierce (a native Ohioan whose stories set in the Buckeye woodlands are genuinely blood-curdling), rooted in Tracey’s mastery of atmosphere, mood, setting, and pacing. All of these elements blend into the novel’s strongest selling-point: its wild and rustic universe of cosmic evil.
Reading “Three Days in Ashford” will be like drifting into another man’s existential nightmares. Realistic, sincere, and relatable, the writing will pique your imagination and effortlessly suspend your disbelief. You may find yourself Googling “Ashford, Ohio,” just to see if any of this is real (because it is so artfully and believably crafted), and you may find that the characters you meet are so convincing, so human, and so engaging that putting the book down is like saying farewell to a group of old friends for an indefinite period of time – a sad and haunting experience.
As a Midwesterner myself, a Hoosier born and raised, I have a very warm spot for Heartland Horror – an appreciation grown out of my love for the Midwest, not from cathartic contempt of its easy-to-lampoon residents. There is something understated and hidden about these states – the endless, whispering cornfields of Illinois, the pine encircled lakes of Michigan, the grey, sleeping woodlands of Indiana – that lends itself to understated, hidden horror. Ashford, Ohio is much like Lovecraft’s Arkham and Kingsport – secretive communities haunted by deeply buried sins – but has a uniquely Midwestern flavor.
Where Arkham is a courtly, New England port (a bit foggy and shabby, but arrogant nonetheless), Ashford evokes Lovecraft’s countryside tales (“The Picture in the House,” “The Dunwich Horror”) with its almost Hawthorne-esque stench of rural corruption and rustic decadence. It is quiet, humble, and isolated – a quintessential Midwestern town, burdened by quiet crimes and secret sins. To me "Ashford" was a relatable haunting: I felt as if I could drive there with ease, finding myself surrounded by its sinister houses, empty and stark like rows of bleached skulls.
I could continue, but my argument is simple: buy this book and read it, and you will have a found a formidable universe to keep on your nightstand. Philosophical but suspenseful, intellectual but engaging, Tracey crafts a new mythos worthy of Lovecraft in a style worthy of King, and if you like horror that makes you think, this book belongs on your shelf. I find myself impatient for more creations of his imagination (perhaps a new collection of short stories or — dare I say — a sequeal could satisfy his readers’ desire for more). It is certainly an imagination worth probing, and I highly recommend that you visit the universe of Ashford, Ohio – haunted by secrets, teeming with terror, simmering with a thunderous energy that threatens to reach up and grab you in.
You can find this excellent work, “Three Days in Ashford,” HERE.
Post Views: 55
CategoryHorror Stories
Tagsart creepy dark film halloween horror horrorart horrorfan horrorfilm horrormovie horrormovies movie scary thriller

8 Horror Novels That Are Based On Real Events