H. G. Wells' The Inexperienced Ghost: A Two-Minute Summary and Analysis of the Classic Ghost Story

September 6, 2019 0 By pavani
As with “The Stolen Body,” “The Inexperienced Ghost” (perhaps Wells’ most anthologized ghost story after “The Red Room” – with good reason, for it is a masterpiece of speculative fiction) is designed to caution anthropocentric hubris. Men plumb the seas, reach into the heavens, bore through the earth, comb through the forests, and plow through the snow, eager and confident in the prospects of discovery. So too do they reach out into the intangible ether to make fleeting contact with whatever denizens there may be of the spirit world. But what might reach back and pull? Comfort is poisonous to Wells. His evolutionary training recoils at the thought of complacency, at satisfaction. During the Edwardian Era mankind was developing airplanes, submarines, arctic vessels, and even rockets, shuttling a race of highly evolved albeit overconfident apes into zones which they were never meant to explore.
This (initially) comic tale follows one such man who is perfectly at ease conversing with, chiding, advising, and evicting ghosts – even going so far as to memorize and replicate their rituals. He has no apprehensions about the ghost-world. In fact, he had been an obstinate materialist until he began conversing with a phantom. But rather than shock, horror, or awe, his reaction to seeing a specter – a species he has ardently denied since childhood – is one of curiosity, entitlement, and hubris. Such, according to Wells, is the chief pitfall of humankind. And so it proves to be for Mr. Clayton. 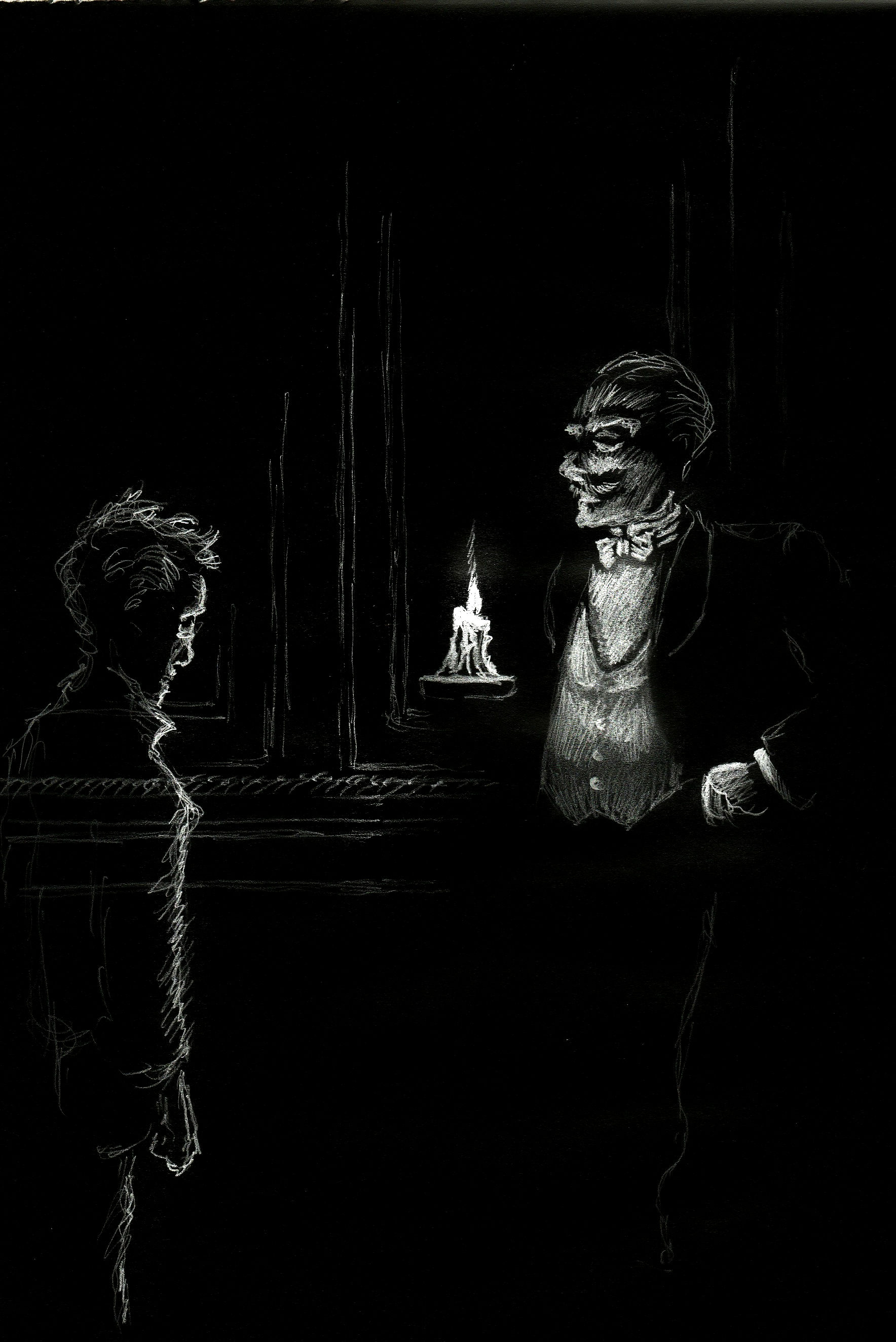 The tale begins with a group of young, upperclass men smoking and chatting by a popping fire in the Mermaid Club, an old lodge with heavy wood paneling, dark corners, and an eerily antique atmosphere. One of them, Clayton, had spent the night there before his friends arrived, and interrupts a discussion of the lodge’s ghostly aura with the news that he had encountered a ghost the other evening. While his friends are shocked and impressed, Clayton – the consummate English chappie, a mixture between the preppy Bertie Wooster and the jingoistic Colonel Blimp – remains unexcited by his experience. In fact, he relates the story as if it were a humorous run-in with a ludicrous stranger. As he tells it, he ran into the ghost in the long hallway, and was surprised by how pathetic and anemic it was. Taking the form of a scrawny, depressed man, who emits a weak “boo” that offends Clayton’s ideals of manliness. Unflapped by the ghost’s transparent form, he chides him for his low energy and shabby appearance. After a brief interrogation, he learns that the ghost came to the Mermaid Club not because of any connection during his life, but because he thought the antiquarian atmosphere would enhance his deficient spookiness.
Clayton demands that he vanish (as he is too pathetic to haunt the venerable lodge, but just scary enough that he could frighten a child), but the ghost sadly admits that he has forgotten how: ghosts disappear only after performing a complex gesture with their hands, and he can’t seem to replicate it. Seeing him as a potential student in manliness, Clayton learns of the ghost’s embarrassing death (by looking for a gas leak with a lit candle), his complicated relationship with his overbearing father, and his overly sensitive personality which held him back during his life. Due to his weakling personality – neither virtuous nor villainous – he had been relegated to Purgatory, and was taught to go haunting along with a group of similarly passive young men. He continued to be haunted by his life (wherein he made a mess of everything he tried and was an utter failure at every challenge), and saw his inability to disappear as just one for embarrassing botchery. Clayton coaches the specter to pull himself together and try doing the hand “passes” he had been taught. Encouraged and inspired, the ghost tries again, and after several attempts, finally succeeds, and disappears.
The story returns to the present time, with Clayton’s fellow chaps impressed by his tale. The night seems darker now, and the mood turns slightly sinister for the reader when his friends ask Clayton to replicate the passes. He is sure that he could remember them, which starts an argument: the narrator is uneasy about the idea while several others are eager to see him try them, and another man, Wish, begs him not to try such a dangerous thing. The louder members of their group succeed at convincing Clayton to try the passes, with Wish becoming increasingly frightened. Clayton, a Freemason, is used to performing subtle and elaborate hand gestures, and uses this experience to replicate the ghost’s strange motions. The last one is to swing the arms wide open and to look up; as Clayton does this, a change occurs in his face, “as a lit house changes when its lights are suddenly extinguished.” The life drains from him, and he falls to the floor dead.
The tale begins as a classic supernatural comedy – and a jolly good one at that. Oscar Wilde’s farcical “The Canterville Ghost,” E. F. Benson’s touching “How Fear Departed the Long Gallery,” Algernon Blackwood’s sentimental “The Woman’s Ghost Story,” and Poe’s caustic “Some Words With a Mummy” are exemplary models of the form, but it is Charles Dickens – “The Lawyer and the Ghost,” “The Bagman’s Uncle,” “The Baron of Grogzwig,” and A Christmas Carol – who excelled in such a fashion as to be considered the godfather of the satirical ghost story. “The Story of the Inexperienced Ghost” – although it bears great similarities to Benson and Blackwood’s pitiable phantoms – begins thoroughly Dickensian with conversations about the afterlife that could just as easily be about petty human affairs (capturing a snake or toad in a garden; ejecting a non-member from a private club; scolding a stranger for inadvertently scaring children; performing a complicated religious or fraternal ceremony; encouraging a man who is a professional failure). It even foreshadows the Edwardian chitter-chatter of P. G. Wodehouse (with all of their “ya knows,” clubbable cheer, and casual references to heavy drinking, Clayton and the narrator could easily pass for Bertie Wooster). And thus, Wells the cynic succeeds in writing a particularly humorous supernatural comedy.
But he is naturally unwilling to leave us smiling. As the chappies become increasingly comfortable with the idea of exploring the supernatural dimension, a darkness begins to fall over the characters, and a sense of dread blows softly in like a fog. The Dickensian mood shifts behind us and we cross into an entirely different story, one suited for W. W. Jacobs (“Jerry Bundler”), Ambrose Bierce (“The Suitable Surroundings”), or Manly Wade Wellman (“Where Angels Fear”). Like Lovecraft, Wells was fascinated by science, its discoveries, and its possibilities. But also like Lovecraft, Wells feared that mankind’s indomitable spirit of entitlement and invincibility would lead to serious trouble down the road. Perhaps that conflicted spirit – one both progressive and conservative, curious and apprehensive – is responsible for this tale: a comedy which ends in tragedy.
You can read the original story HERE!
And you can find our annotated and illustrated collection of Wells’ best supernatural fiction HERE!
Post Views: 189
CategoryHorror Stories
Tagsart creepy dark film halloween horror horrorart horrorfan horrorfilm horrormovie horrormovies movie scary thriller